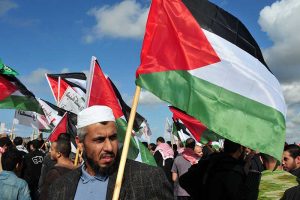 The Palestinian people, also referred to as Palestinians or Palestinian Arabs , are an Arabic-speaking people with family origins in Palestine. The total Palestinian population, including descendants, is estimated at approximately 10 million, roughly half continuing to live in the region of historic Palestine, an area encompassing Israel proper, the West Bank including East Jerusalem, and the Gaza Strip and parts of Jordan. By religious affiliation, most Palestinians are Muslim, particularly of the Sunni branch of Islam, and there is a significant Palestinian Christian minority of various Christian denominations, as well as small Samaritan community. As the commonly applied Palestinian Arab ethnonym implies, the current traditional vernacular of Palestinians, irrespective of religion, is the Palestinian dialect of Arabic. For those who are Arab citizens of Israel, many are now also bilingual in Modern Hebrew. The first widespread use of Palestinian as an endonym to refer to the nationalist concept of a Palestinian people by the local Arabic-speaking population of Palestine began prior to the outbreak of World War I, and the first demand for national independence was issued by the Syrian-Palestinian Congress on 21 September 1921.After the creation of Israel, the exodus of 1948, and more so after the exodus of 1967, the term came to signify not only a place of origin, but the sense of a shared past and future in the form of a Palestinian nation-state.The Palestine Liberation Organization (PLO) represents the Palestinian people before the international community.The Palestinian National Authority, officially established as a result of the Oslo Accords, is an interim administrative body nominally responsible for governance in Palestinian population centres in the West Bank and Gaza Strip. Rafael Ben-Ari/Chameleons Eye